COVID in DK and Albania, the struggle for the first IGC, the Greek – Albanian sea border, Albanian children and mothers back from Syrian camps and a new member of the Albanian royal family.

Home » COVID in DK and Albania, the struggle for the first IGC, the Greek – Albanian sea border, Albanian children and mothers back from Syrian camps and a new member of the Albanian royal family.

I hope that you are well and that the COVID -19 situation is not spoiling too much of your professional and private life. Below the situation on 4. November in Denmark and Albania in brief from WHO – Europe. 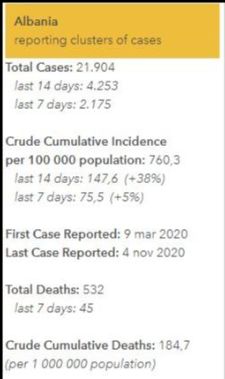 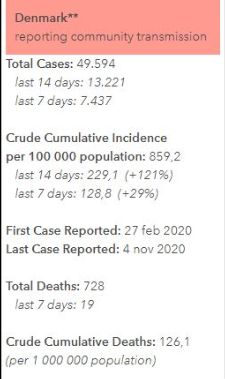 But back to politics – and a personal comment:
1. Jozefina Topalli, former member of the right wing DP (Democratic Party) and former Chair of Parliament, has started a new right wing party based on a base of intellectual. But she is not the only new party leader. 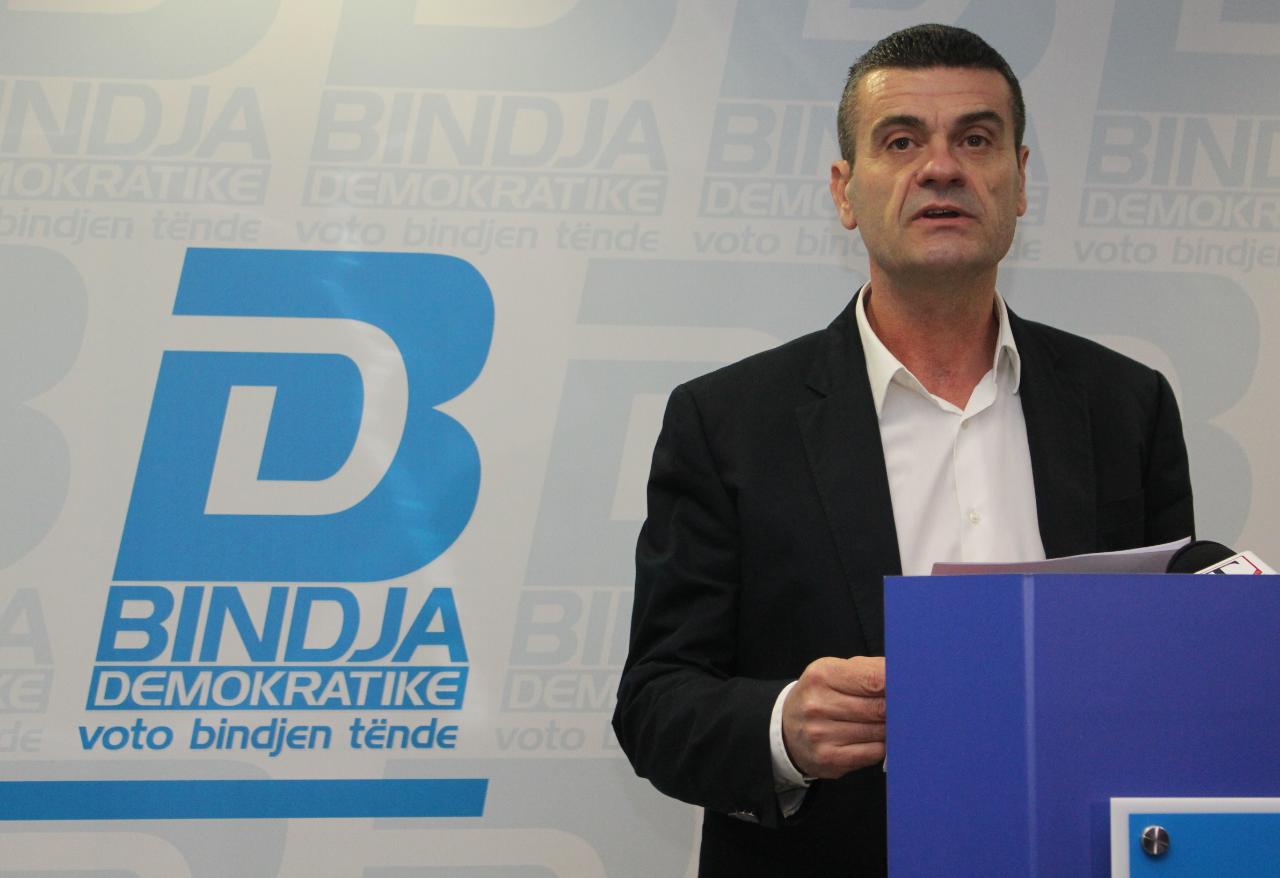 There is also former DP MP Astrit Patozi with Democratic Conviction. Democracy is booming in Albania.

2.The strategists in the EU commission are eager to start the first IGC with North Macedonia and Albania – and they have many good reasons for this. But again it seems that a few countries, among them Denmark, are trying to delay the important process. It´s difficult to find convincing arguments for this position, especially after the adaption of the new set of strict rules for the promised negotiations of the 35 chapters of the aquis. Not convinced? Then please read more here.

The High Representative of the EU for Foreign Affairs, Josep Borell on Tuesday November 3.:
Quote: “I welcome Albania’s commitment to move forward on the path to EU accession. As discussed with Prime Minister Rama, it is essential to maintain the dynamics of the EU-Western Balkans relationship. With Albania playing an important role”.

Euronews Albania reported on Monday Oct. 26. that there are four European Union (EU) member states that are against the holding of the first intergovernmental conference (IGC) for Albania. Ahead of the European Council meeting scheduled to be held on 10 November, France, the Netherlands, Denmark and Spain are circulating a document seeking the postponement of the holding of first IGC for Albania. The said document emphasized the need for the prompt reactivation of the Constitutional Court before the holding of the first IGC. As per the said document, pending the top court’s reactivation, the first IGC could be held in February or March 2021.

In an interview given to Euronews Albania, on October 21, Head of Delegation of European Union to Albania Ambassador Luigi Soreca said that in order to advance the accession negotiations between the EU and Albania the real point that needs to become super urgent is the fulfillment of the post in the Constitutional Court. 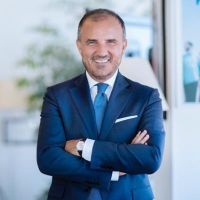 “This is a necessary condition for the first IGC to be called, every member state is waiting for this to happen. So there is clearly an urge towards the Judicial Appointment Council (JAC) and the other appointing authorities to do their best and even more in order not to miss the train this year of the IGC,” he said. Asked about when the decision on the holding of first intergovernmental conference would be taken, ambassador Soreca said that, “The next four to six weeks, will be crucial for the member states in the Council to follow up on the progress report of the European Commission and take the final decision. As you know, this is a unanimous decision. So every member state has to be on board. It’s a historical decision. And that’s why it’s so important that Albania presents itself to this moment, having done the homework.” “There is still a chance if the Constitutional Court condition is fulfilled that member states might appreciate the effort made by Albania, which has been recognized in many areas by the member states, and therefore give the possibility to the German presidency of the Council to call the IGC still this year. It is not ruled out,” Ambassador Soreca further said. “Political dialogue, the correctness, the implementation of the 5 June agreement, the Constitutional Court, these are the messages that we need to get in order to finally open this path that we all want to be opened.”

Albanian Prime Minister Edi Rama on October 21. hailed what he called the start of “a new chapter” of better relations with Greece on Tuesday as he agreed with Greek Foreign Minister Nikos Dendias to resolve the maritime border dispute between the two countries through the International Court of Justice. 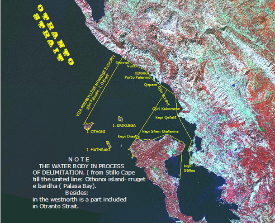 “I thank the minister for the fact that, despite the fact that at certain moments we have had tensions, Greece has never been an obstacle in our road towards the EU,” Rama said.
Dendias replied: “We have the will to resolve the problems in a climate of mutual trust.”

Prime Minister Edi Rama announced on Monday October 26 that negotiations mediated by the Syrian Red Crescent have secured the imminent return of four Albanian children who have been trapped in refugee camps in Syria for years, as well as one of their mothers. 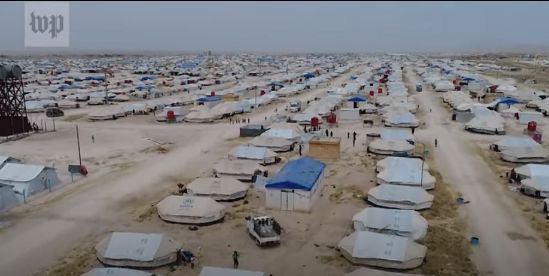 He expressed hope that more children can be brought back from Syria in the second phase of the operation.
Shortly after Rama’s statement, the Syrian Red Crescent published photos on Twitter showing the children leaving the al-Hawl refugee camp. It said it had acted after receiving a request from the government of Albania.
About 51 Albanian children have been trapped in Syria since the onset of the civil war after their parents joined Islamic State or other extremist groups there. Many of them live in the al-Hawl refugee camp, which is under the control of the Syrian Democratic Forces.
Tens of thousands of people live in the camp and humanitarian organizations have warned that the already poor conditions there have been deteriorating. Some 140 Albanians from Albania are known to have joined Islamic State or other militant groups in Syria.

Prince Leka and his wife Elia Zaharia have become parents for the first time.
The royal couple has chosen a very special and meaningful name for the baby girl. They have decided to call Geraldina, as queen, Leka’s grandmother. 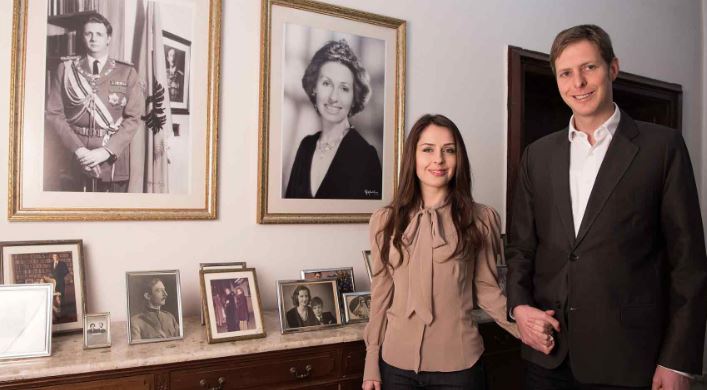 Elia gave birth to the girl on Oct. 22 in the maternity hospital “Queen Geraldine”, and they enjoy full health. “The Albanian Royal Family is happy to share the news of the birth of Her Royal Highness Princess Geraldine who came to life to their Royal Highlands Prince Leka of the Albanians and Princess Elia, on Thursday, October 22, 2020, at 09:30”, writes Prince Leka. Young Geraldine was born on the day Queen Geraldine passed away, October 22nd. More here.